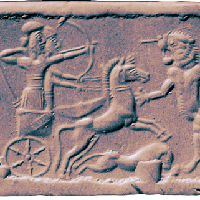 The ancient world was as interconnected and complex as our own. Over the millennia, new cultures and dynasties arose, expanded, and waned, affecting not only their regions of origin but the other civilizations and cultures with which they were in contact. Cultures traded, invaded, conquered, learned and appropriated from, rejected and embraced one another, and the materials, literature, art, religion, politics, and traditions of various ancient centers often resonate with traces of these forms of contact and conversation.   In Dr. April Jehan Morris’s ARH 000 course, her students explored various ancient cultures and their contact with and influence on one another. By examining the societies around and beyond the Mediterranean holistically, the class captured a view of what Polybius’ called “an organic whole” in which interconnection and innovation both played definitive roles in shaping the art, architecture, and cultural fabric of ancient societies.