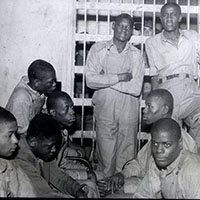 More than eighty years ago, on March 25, 1931, nine young African Americans hopped a train in a Chattanooga freight yard and headed west to seek work. Instead, they found themselves joined together at the center of a life and death courtroom drama, falsely accused of rape. The Scottsboro Boys’ cases focused an international spotlight on Jim Crow in America in the 1930s. In 2013, Alabama legislators passed two bills, acknowledging that the men were “victims of a gross injustice.” One, a resolution, exonerated the nine defendants; and the other created a law making it possible to grant posthumous pardons to the Scottsboro defendants. Part of the Scottsboro Boys Museum University-Community partnership, this digital project aims to create a curated online repository of letters about the Scottsboro Boys Trials sent to Alabama governors during the 1930s from a wide range of correspondents to shed new light on these pivotal historical events.