Jan 28: At his impeachment trial, Trump’s lawyers argue he did nothing wrong.   HHS Director, Alex Azar, tells reporters they have been monitoring the virus since December. In a top secret intelligence briefing, NSA Advisor Robert O’Brien tells Trump of the catastrophe that is coming.  This does not go public until Bob Woodward published his book, Rage, in the fall. News comes from China that Dr. Liang Wudong, who was an early whistleblower on the virus and who was forced to recant his warnings, has dies of the new virus.

Jan 29: U.S. expands screenings for coronavirus in airports and the CDC issues a highest-level travel warning.  The first group of passengers return to California from Wuhan, via a stopover in Alaska. Dr. Carter Mecher at the Department of Veterans Affairs, sets off an email string, called the “Red Dawn String,” warns colleagues that, “this is going to be bad.”  It does not go public until March 18. *

From the Cutting Room Floor...

In the 1988 film, The Navigator: A Medieval Odyssey, directed by Vincent Ward film, the Black Plague comes to a small village in England. A clairvoyant, nine-year-old boy sees that there is a way to save his community by running through a portal in time and space and making a pilgrimage that will ensure God’s protection. It is still visually breathtaking today. In my mind, the people in this film exist in same world as Tarkovsky’s Andrei Rublev—all of them running from forces that are beyond their control, standing barefaced before a world that brings such beauty and such death.

Today, like in the fifteenth century, people are running from illness. Two hundred and ten evacuees from Wuhan, mostly worried diplomats and their families, have landed in the United States.[1] More were supposed to travel in the mass exodus from China, but they presented scary symptoms and had to be left behind until doctors could be sure they weren’t sick. The process of getting to the United States must have been grueling, especially with children. So many tests and forms, lots of waiting and uncertainty, and then the order to hurry up, knowing that there are some who will be abandoned to an uncertain future, just relieved to have a plane ticket. Then on to refuel and another screening in the dark winter of Alaska, finally landing thirty hours later at the March Air Research Base in Solano County California, near Riverside.

The base sits in the flat Temecula valley, where the steady wind whips over the mountains and west to the sea. The sun muscles its way into every corner of the earth, the landcape pock-marked with palm trees that line the highway. When the evacuees arrived, the National Center for Emerging and Zoonotic Infectious Diseases, a division of the CDC, screened them again (although they don’t actually have real coronavirus tests. Only the CDC in Atlanta has those tests. One can only hope that the staff were wearing adequate protections). Workers with the Administration for Children and Families, a unit within Human and Health Services, will help them settle into the base today, making sure everyone has a shower and a clean towel, offering books to children and hot coffee to adults. From there the passengers can decide whether to remain in quarantine for three days or travel home, where they will self-monitor for an additional fourteen days. It sounds rough, but compared to the lockdown the Wuhan authorities have invoked, it is a light sentence.

The key word to learn is “comorbidity”—meaning the conditions one already has (like diabetes and heart disease) that make it much harder to overcome disease. Eleven of the seventeen people that died had comorbidities. One had cirrhosis of the liver, which probably means he was a heavy drinker. One man had aortosclerosis, the plaque buildup inside the large blood vessel that feeds the heart, often a result of diabetes, high blood pressure, smoking, or obesity. Hypertension is another frequent comorbidity.

My father, who was an epidemiologist working in East Africa in the 1960s and 70s, used to say that some viruses “culled” populations, weeding out the weak, elderly, and infirm. He talked constantly about how social and economic factors play a huge role in determining who in the population would develop comorbidities and the susceptibility for disease. He eventually moved to preventative medicine, preaching the gospel that the only way to stop disease was to build social structures that prevented people from developing comorbidities. He moved from a position as epidemiological consultant for the UN to become a lowly general practitioner in a small town in the Deep South in the mid-1970s because he wanted to care for a community, and practice what he preached. It is terrifying to think what this virus could do to a country that seems to have forgotten these simple lessons. 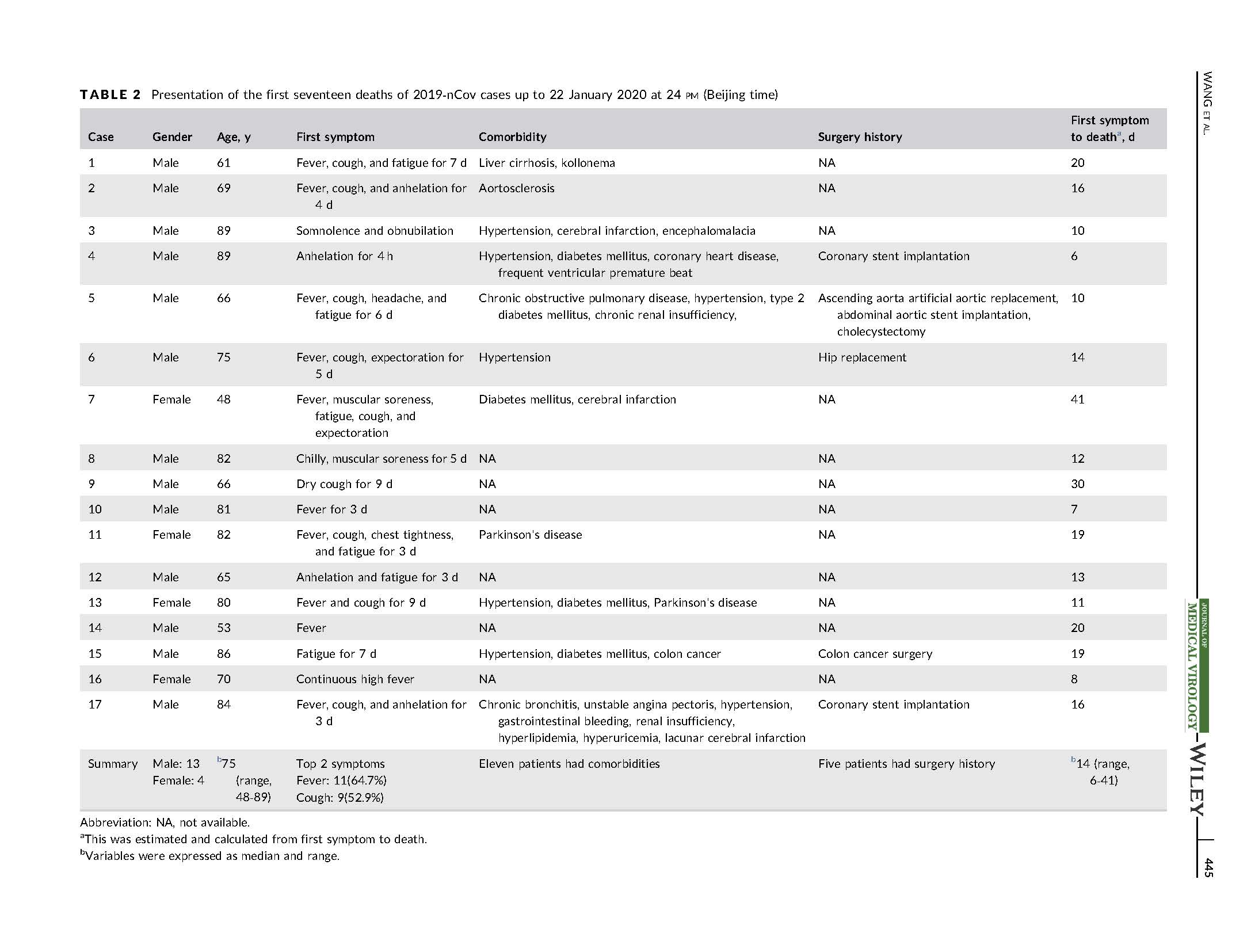 This man deserves our endless respect
Dr. Liang Wudong,
who was treating patients of corona virus in wuhan, china,gets infected while treating patients and become the first doctor to die from the new #Coronavirus. , will be remembered for his service to mankind pic.twitter.com/Gumlylrq0B

this needs more attention… the corona virus is currently an epidemic in China but it can easily become a pandemic… why aren’t more people talking about this!? we need to help them https://t.co/Ug67EXnYL3

2020 needs to calm down and above all, LETS PRAY! 🙏🏻 pic.twitter.com/eDdylCdfwh