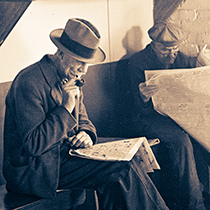 This project is a collaboration between the ADHC and the St. Louis Public Library which aims to digitize the extremely rare newspaper publication Hobo News from the early twentieth century, and ultimately to make this digital collection available to the public. The Hobo News was created by and for hobos, including a gregarious variety of materials from reports from workers’ societies and conventions to creative re-writings of hymns and popular tunes aiming to propagate socialist ideals, as well as adverts placed by families seeking lost or missing relatives who they hoped might be known among the travelling community. There is only one known complete run of the Hobo News extant to us today, housed in the Special Collections of the St. Louis Public Library, and they are graciously partnering with us to create a proof-of-concept site which we hope will later grow and be available publicly. Ultimately, we aim to incorporate not only scans of the publication on the site, and to make these fully searchable via OCR and detailed metadata, but also to create visualizations showing the geographic range and spread of the publication and its contributors which will highlight its very specific relationship with St. Louis and other key hubs in the early twentieth century.